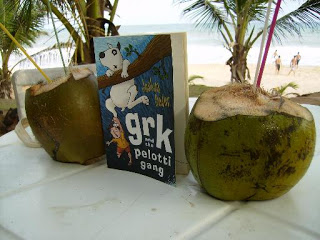 I’ve just reviewed a novel set in Latin America, Daniel Finn’s Two Good Thieves. The book is set in an unnamed country, not quite Brazil or Argentina or Venezuela or Mexico, but a mixture of them all. Mal Peet has done the same thing with his Paul Faustino novels, Penalty, Keeper and Exposure.

I wonder whether Latin American writers are producing their own children’s books set in their own countries. If so, when will they be translated into English?

To brush away those wintery blues, here is a picture of Grk nestling between two coconuts on a Brazilian beach named Imbassaí. Many thanks to Nigel for the photo.

(If you’re in the Southern Hemisphere, of course, you’ll be enjoying the spring right now. But here in the north, the nights are long, the days are short and it’s getting colder every day.)