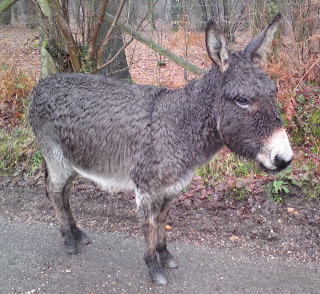 I was walking in the New Forest last weekend and came across this donkey. He was looking rather gloomy, as donkeys often do. It was raining, and had been all day, so his hair must have been soaked, and his raised ears and long face gave him an expression of profound pessimism.

Cheer up, I wanted to say. At least you’re not in Morocco. Don’t you know how they treat donkeys there?

There’s a Moroccan donkey in my new book – as you’d probably guess from the title – and I remember looking at donkeys in Marrakech and feeling deeply sorry for them.

Wandering through the narrow streets, I’d often come across a donkey standing against a wall, waiting patiently for his owner. Some were tied to drainpipes or lampposts. Others were strapped to carts stacked with bricks or lanterns or rubbish. Their legs were covered with old bruises and half-healed sores. Their fur had the texture of a moth-eaten carpet.

When I was writing the book, I was sent this picture by a friend of mine, Richard Hammond, the travel journalist. (Not the driver.) 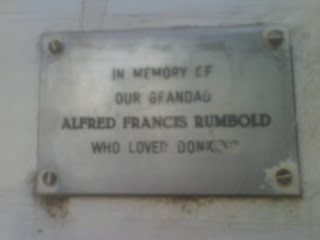 He took it in Marrakech. It’s on the wall of a donkey sanctuary. I didn’t go there myself, but I hope I will one day.