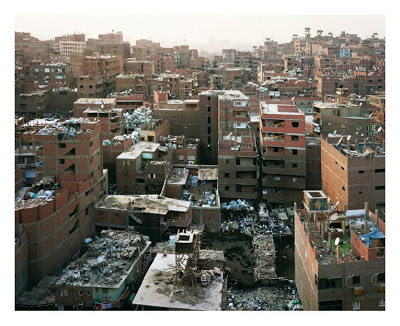 I recently reviewed The Glass Collector, Anna Perera’s second novel, a story about the Zabbaleen, the rubbish sifters and collectors who inhabit a Cairo slum named Mokattam.

My review is here, but if you’re interested on the book or its subject, I’d suggest you read Leslie Wilson’s review first. As she explains, she has visited Mokattam and knows the subject well:

I was with my husband, who is a consultant in Wastes Management with a special interest in the informal sector, and a group of waste experts that included some informal recyclers from India and South Africa. We were welcomed into the workshops and saw the recycling of plastic and textiles; we also visited the ‘recycling school’ where boys and girls can earn a living as well as learning to read and write. It’s a cheerful building, whose bright blue paint made a brave show in the November sunshine. I was deeply impressed by the Zaballeen’s expertise, their hard work and cheerfulness, and their hospitality – and moved by their problems.

Her review is in Armadillo magazine; you’ll find it here. I wish I’d read it before I wrote my own.

She also discusses a film called Garbage Dreams, which sounds fascinating; a documentary about the Zaballeen which Leslie describes as “sensitive, moving, and totally engaging”. It’s the sort of film that should be on TV, but probably won’t, so I’m going to have track down a DVD.

(The amazing picture is by a photographer named Bas Princen: I don’t know him, or anything about him, but I took it – without permission, I’m afraid – from this website, which has more of his fabulous photos.)