I love getting letters from readers, particularly if they are accompanied by drawings.

A couple of years ago, Brody sent me a drawing of a dragon; recently he sent me another. 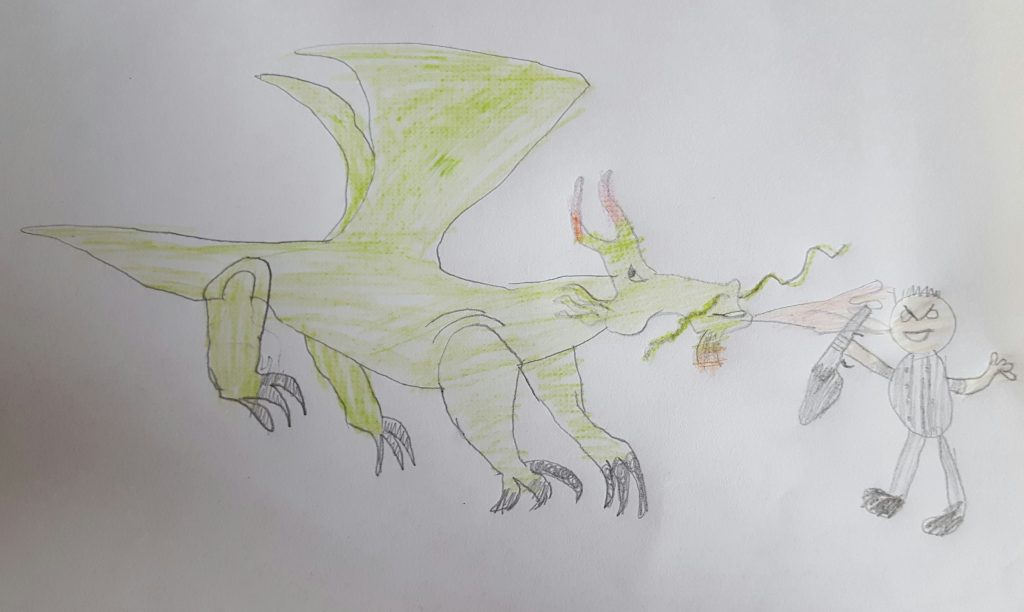 And here are some letters from St Joseph’s School in Highgate, which Garry and I visited together. 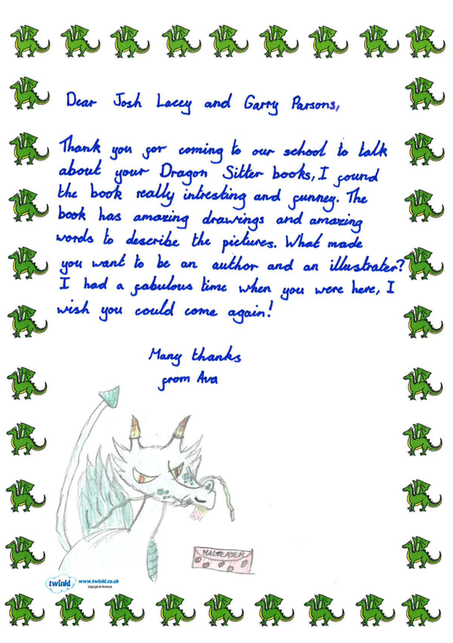 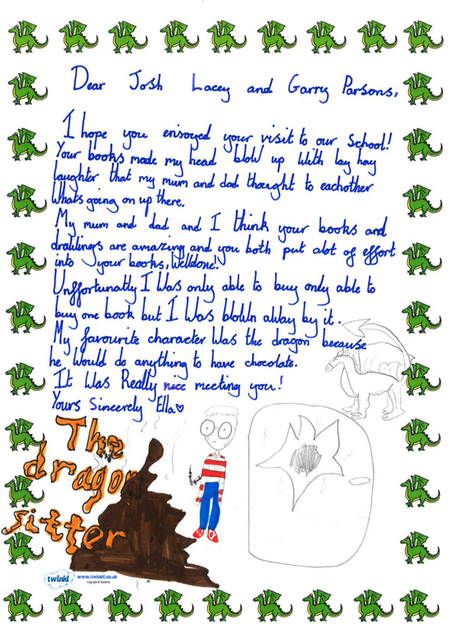 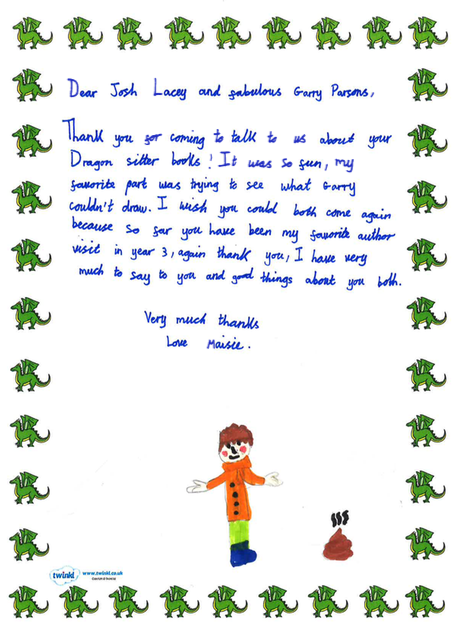 Some pictures from recent Dragonsitter events with Garry Parsons: 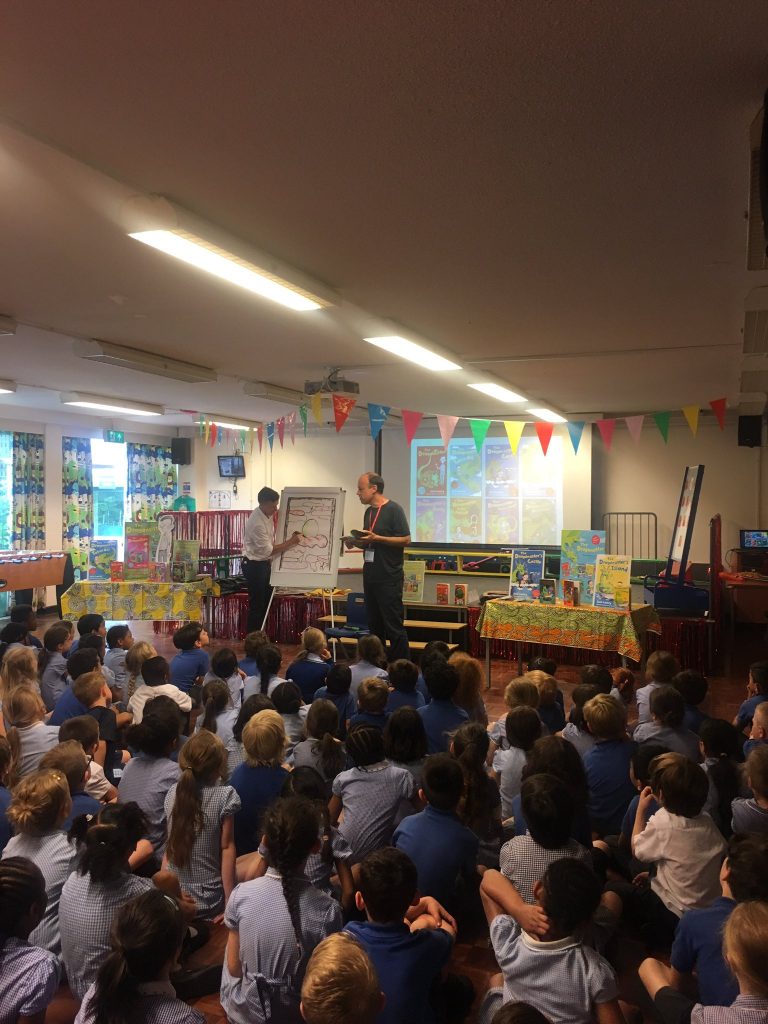 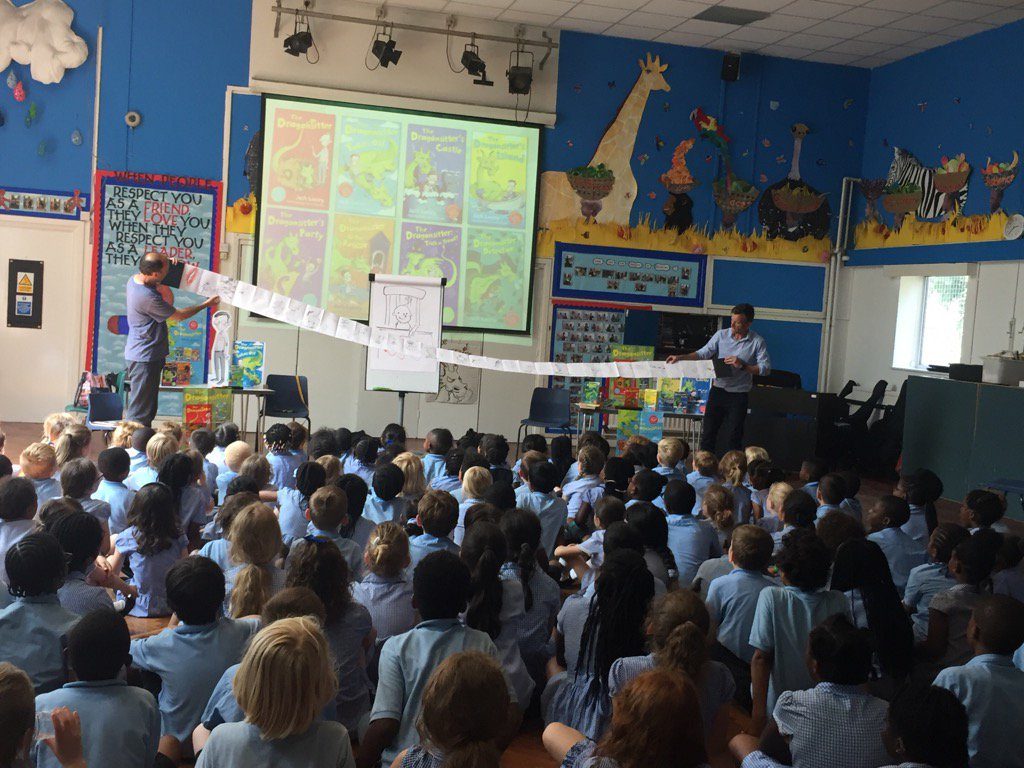 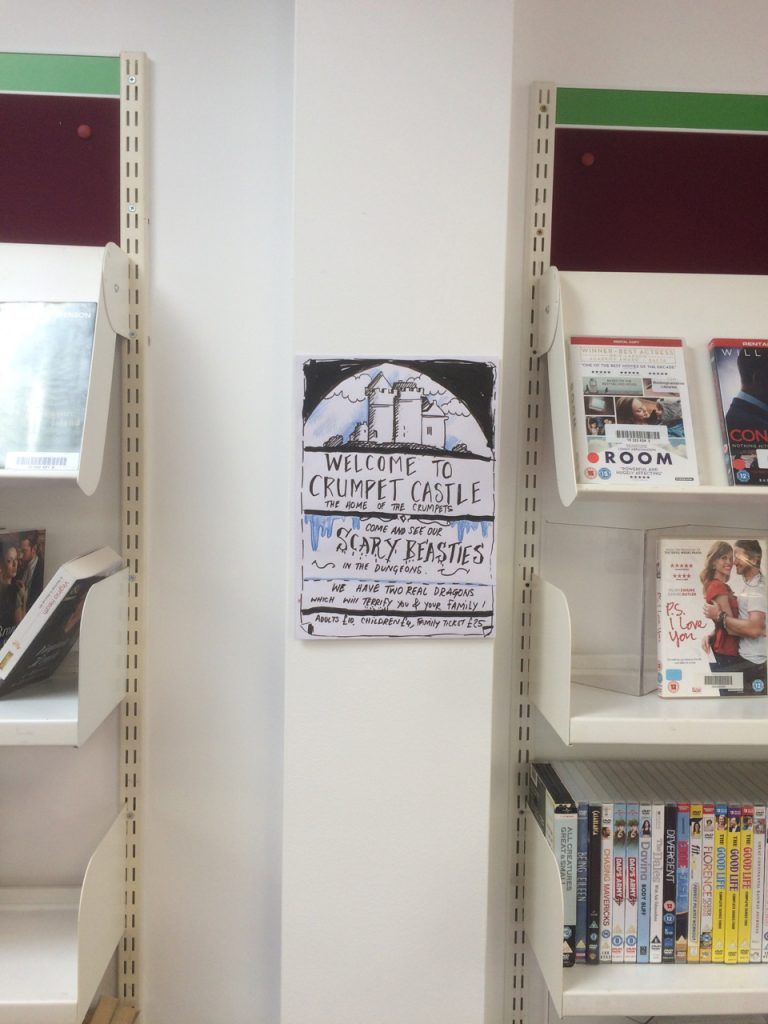 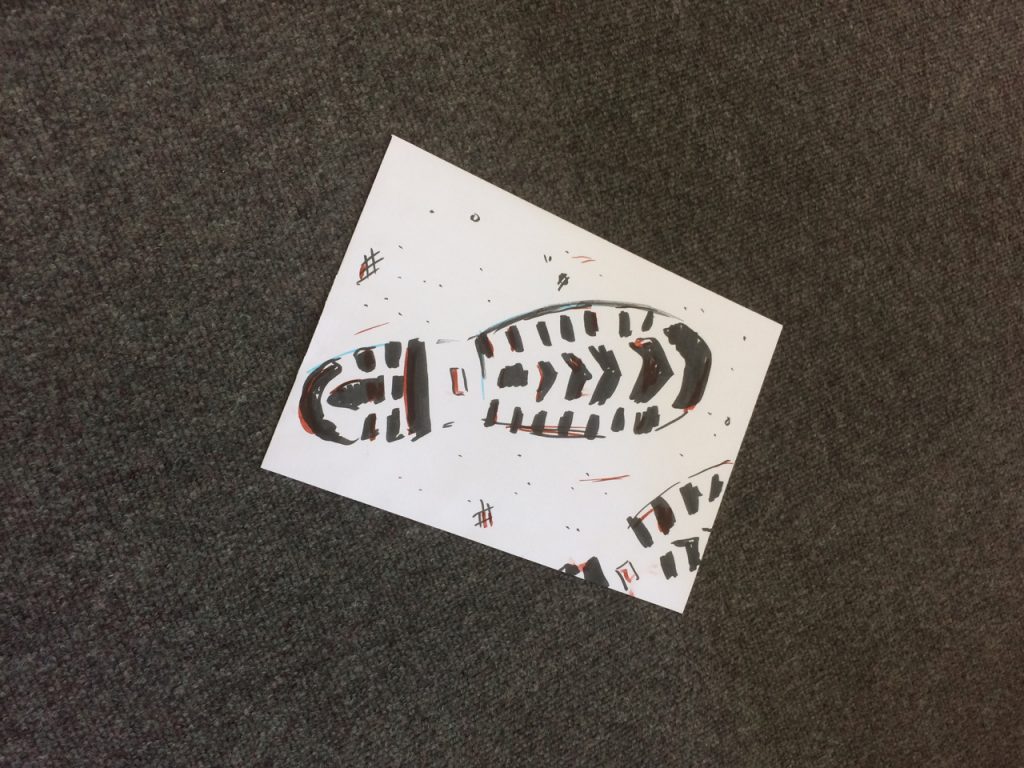 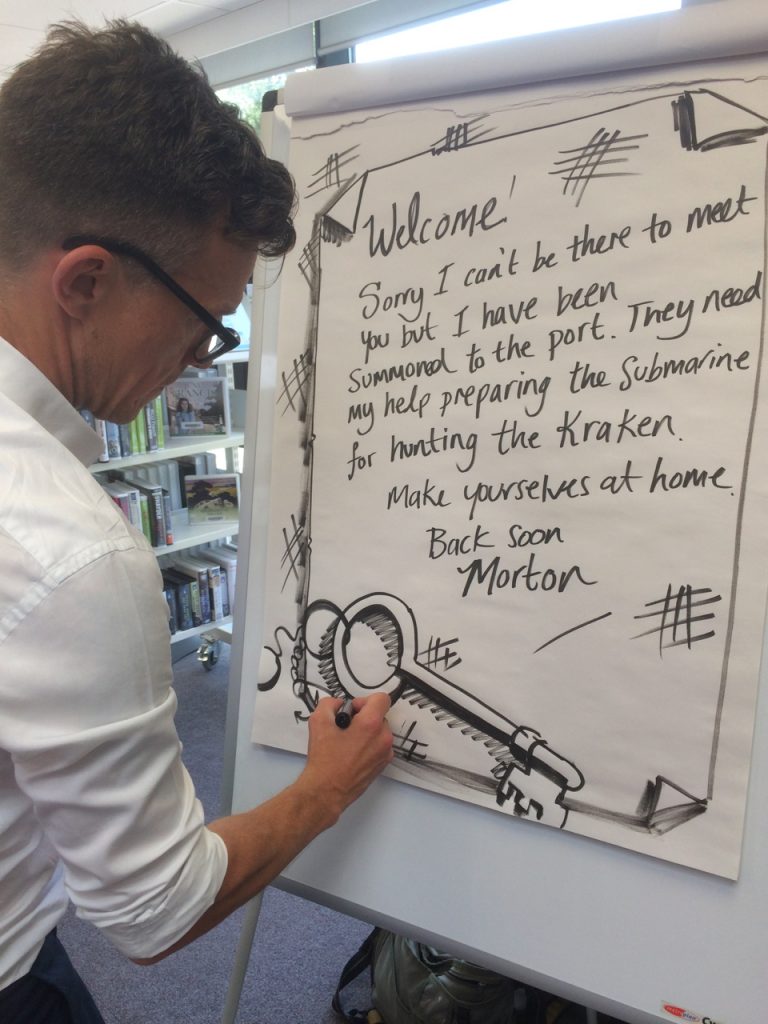 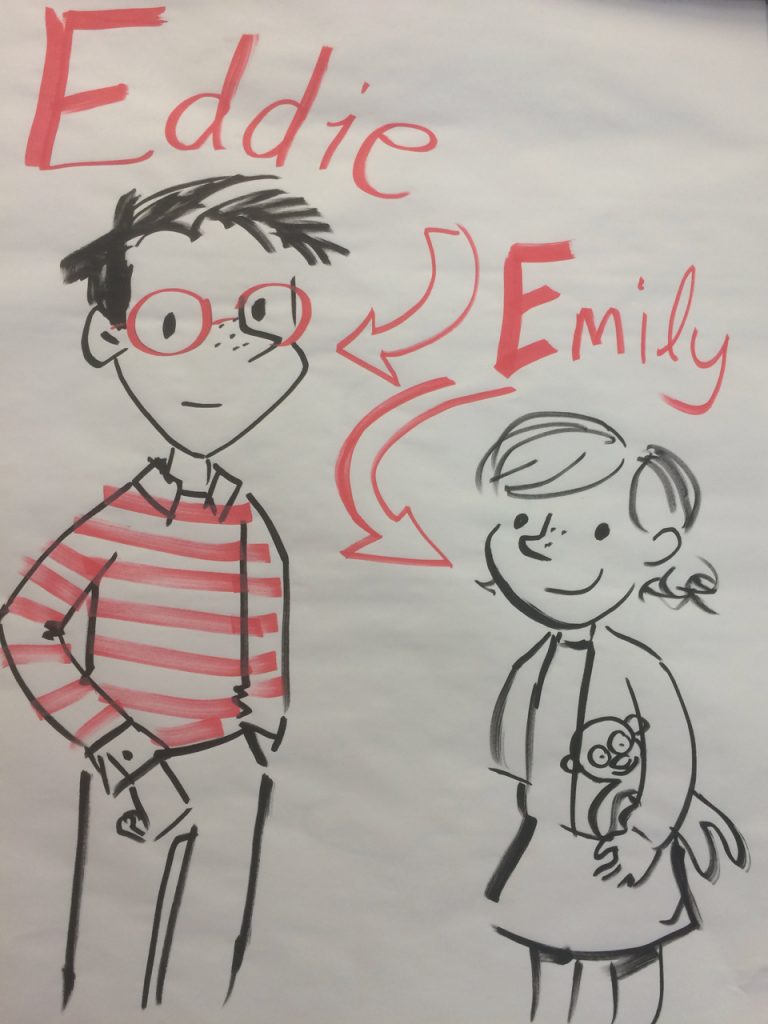 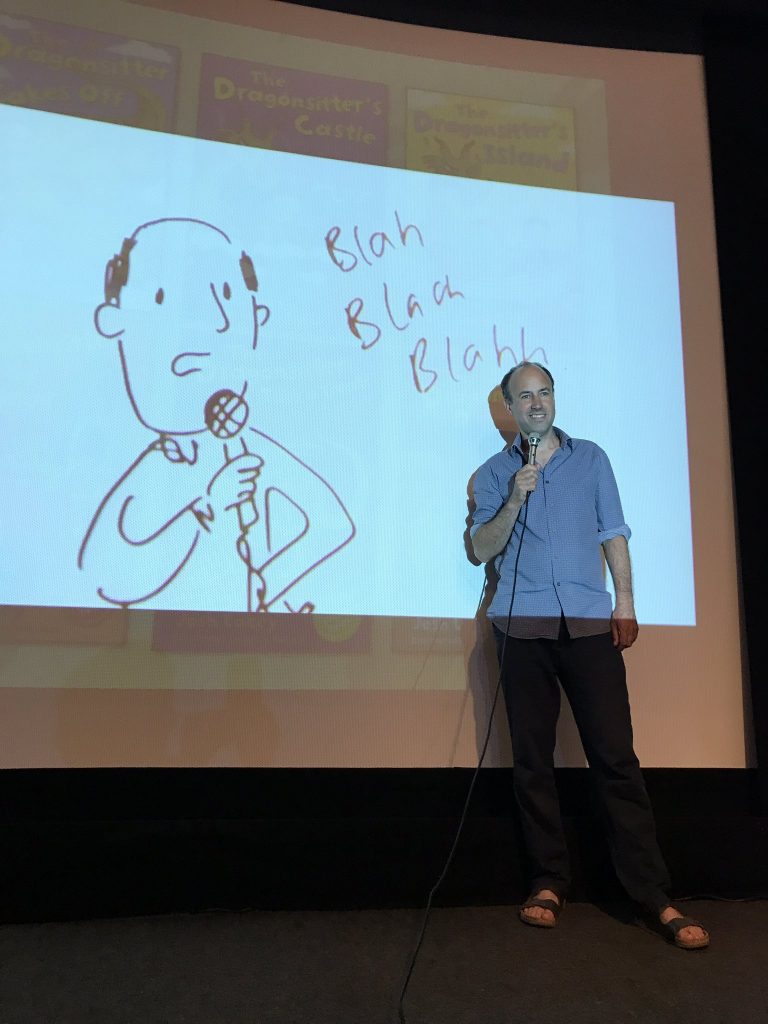 Thanks to Tales on Moon Lane, the Children’s Bookshop in Muswell Hill, Buckingham Literary Festival, and Ipswich Children’s Book Group who organised and hosted our events.

I’ve just spent a week at Datchet St Mary’s primary school, talking to children in all the different classes, and helping them with their own creative writing.

I don’t often get to spend a whole week in a school. Usually I visit a school for no more than a single day, and often for no more than an hour. So it was wonderful to return to the school every day for a week, and see the same children again, and work with them on their writing, and watch their stories grow and develop.

Datchet is a village near Windsor. A five minute walk from the school takes you to the Thames, and the children know it well. They canoe on the river, or walk their dogs along the bank.

When I was preparing for my work at the school, I did a bit of research into Datchet. I re-read the funniest book ever written (Three Men in a Boat), but was disappointed to discover that Datchet hardly gets a mention. I thought about the places nearby – Windsor, Eton, Slough – but didn’t want to limit our stories to any of them. In the end I decided to draw on two children’s books which begin on the banks of the river, The Wind in the Willows and Alice in Wonderland.

Mole sets out on a journey by the river… He meets Water Rat, Badger, Toad… 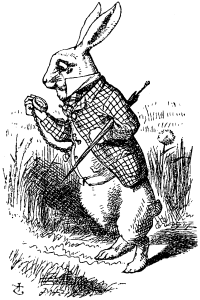 Together we read the first pages of these books, then created characters who could explore the river, its islands and its banks.

I was very impressed by the creativity and enthusiasm of the children at the school. And by their powerful imaginations. We wrote stories together. And drew pictures. And invented characters and plots. And created books.

A photographer from the local paper, the Windsor Express, came to the school and took this photo. A nice memento of a week in Datchet. 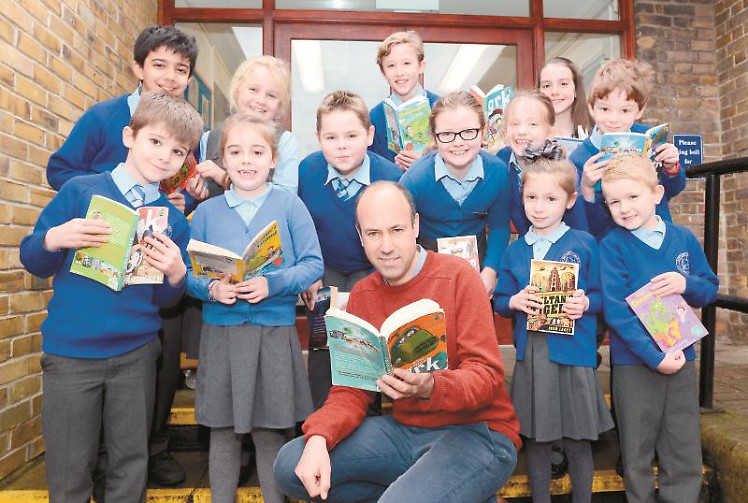 Sometimes I arrive at a school, having travelled by train and taxi, battled rain or wind, and get into the hall with my bag, my books, and my USB stick – and there see a display so lovely that I am immediately filled with renewed enthusiasm and energy, which is exactly what I need to talk to a couple of hundred kids.

That’s just the experience that I had a couple of months ago at Warden Hill school in Luton. One of the teachers had created an amazing display devoted to the Dragonsitter. At the heart of the display was a huge green dragon. 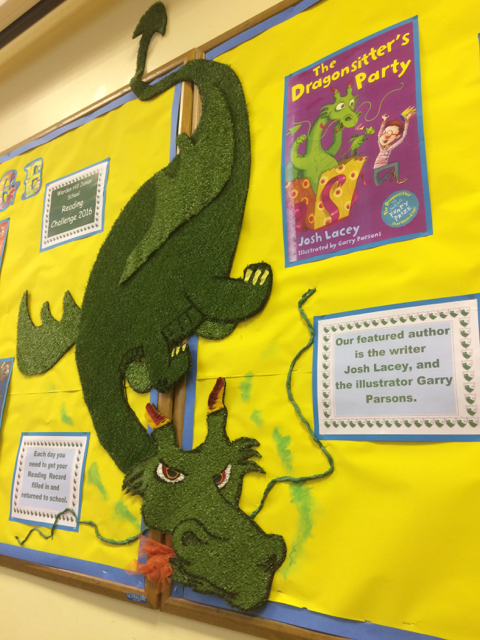 He’s probably the first astroturf dragon in the world. And certainly the best. 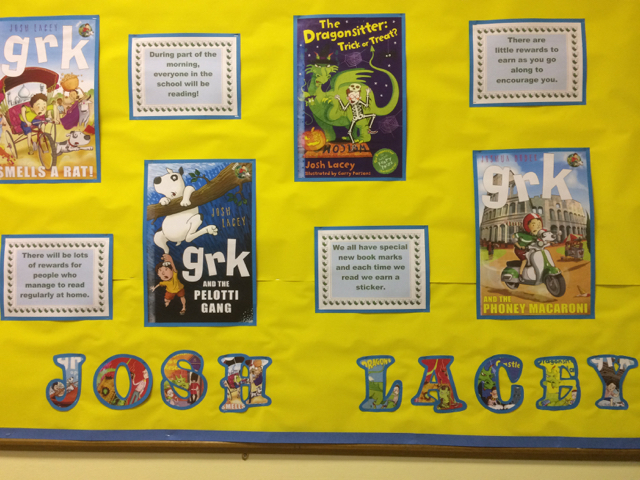 While we’re on the subject of school displays, here is another from Ark Swift in London. 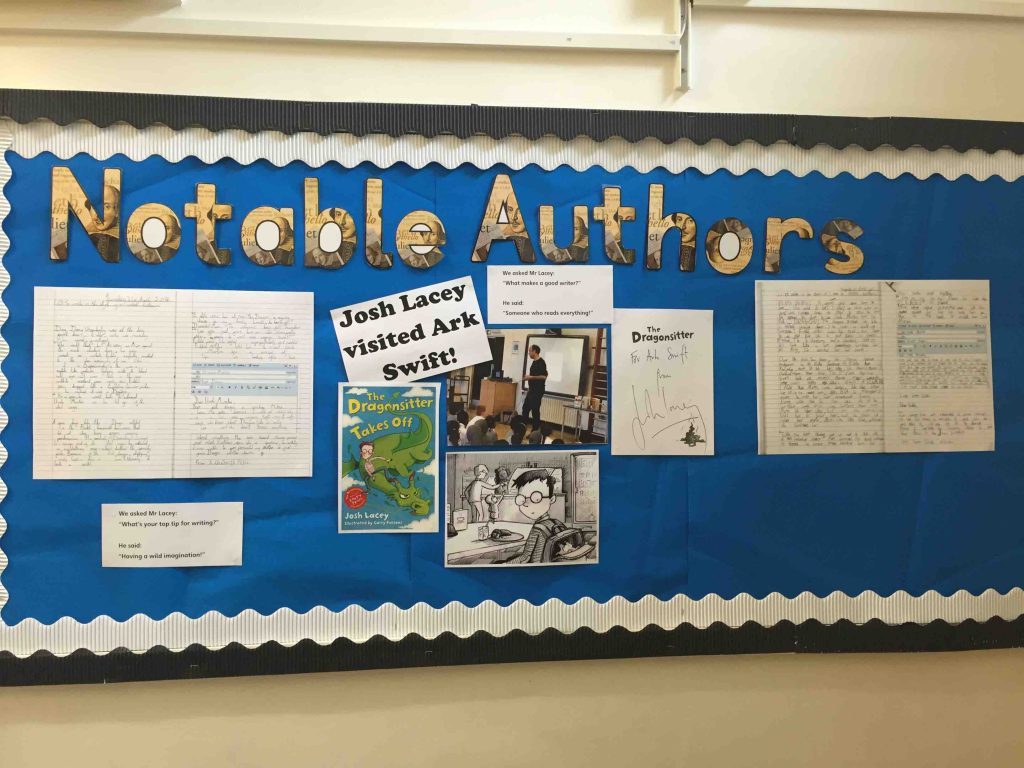 And here are a few more pictures from another recent school visit, this one at Baden Powell Primary in Hackney. Two of Garry Parsons. And two more drawn by him. 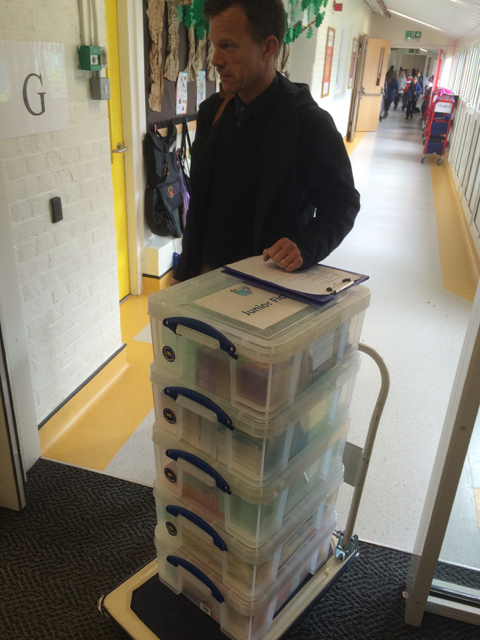 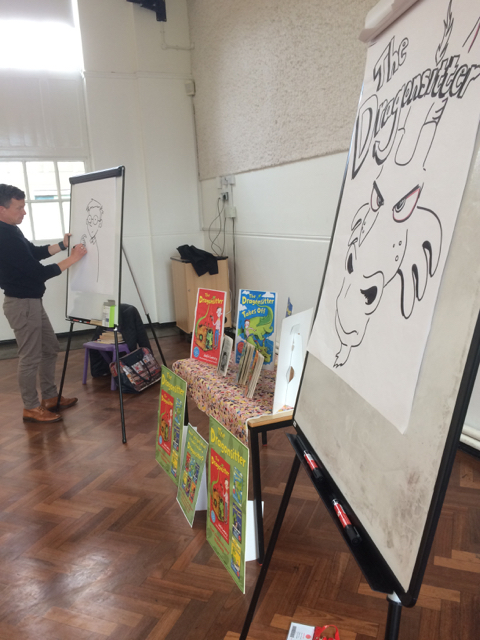 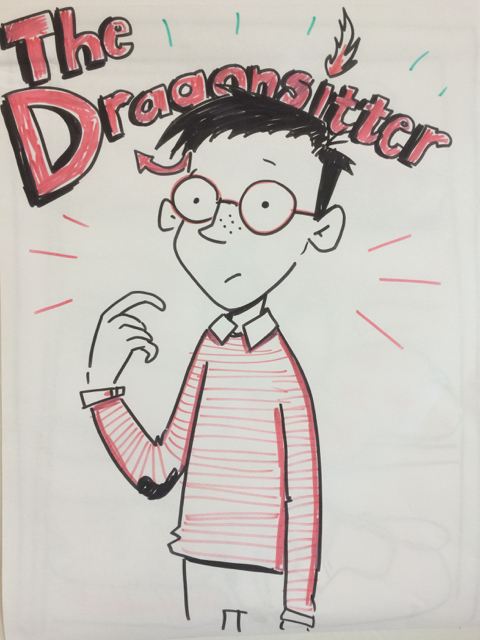 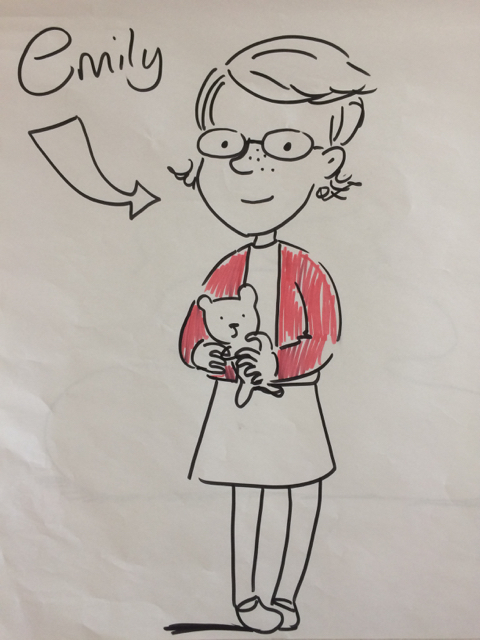 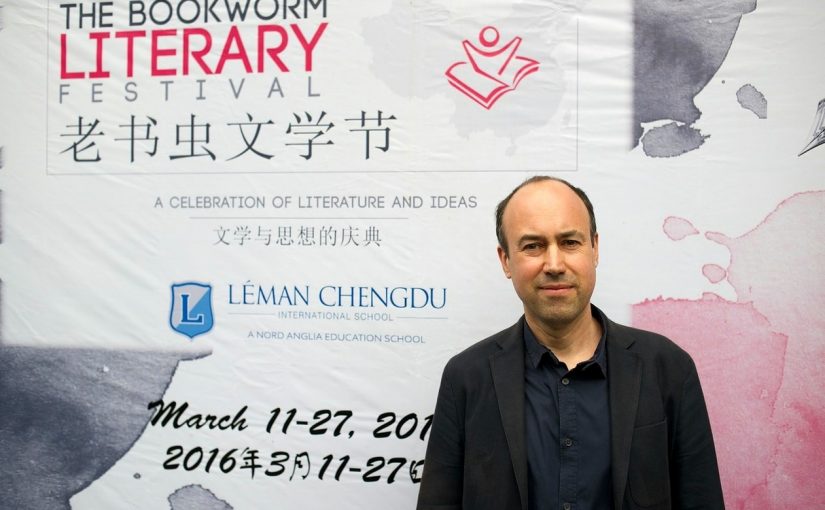 Just before Easter, I was lucky enough to be in China, visiting Beijing and Chengdu as a guest of the Bookworm Literary Festival.

The Bookworm is a small chain of bookshops in cities throughout China, run by a wildly energetic expat named Peter Goff. This year was the 10th that he and the other bookshop managers have been running a wonderful festival, bringing local and international authors together.

Rather than writing about my experiences, I’m simply going to put a few photos here, along with some explanatory captions. I’ll put up some photos from Beijing another day, but all the photos below are from Chengdu, my first stop, where I did several events: some talks, a school visit, and a workshop.

Chengdu is a city of about ten million people. It’s the capital of the Sichuan province, renowned for its magnificently spicy food. And it’s famous too for its pandas; Chengdu is home to the Giant Panda Research Centre, where you can watch families of pandas lounging about their pens, happily crunching their way through great piles of bamboo.

After visiting a school recently, I was given a large bundle of wonderful thank you letters. Here are a few of them:

I’ve done several events around the country over the past few weeks, both in schools and libraries, some alone, others with Garry Parsons. Here are a few photos:

The two Grk covers and the Dragonsitter collage are drawn by children at Elson Primary in Gosport, where I spent World Book Day. The entire school – staff and pupils – were in costume, most of them dressed either as Grk or a dragon. It was wonderful.

All the other drawings are by Garry.

This week I was invited to open a new school library. For any writer, or indeed anyone involved with books and storytelling, I can’t think of many more satisfying ways to spend an afternoon.

The school was Furness Primary in what used to be called Harlesden and is now probably part of Kensal Rise. Whatever you choose to call this particular area, it’s part of Brent, where the council has closed several libraries recently. So it was especially gratifying to witness the opening of a new library inside a school.

Before I cut the ribbon on the library, I did a couple of assemblies, first talking to the youngest kids, then the older ones, answering their questions and describing how my own love of books had been fanned by libraries when I was young. I talked about the books that I loved then, and still love now, many of which I would never have discovered if I hadn’t been able to wander slowly up and down the shelves of a library, plucking books that looked interesting, glancing at covers, scanning blurbs, reading a page or two, searching for the perfect book, the book that spoke to me.

Then I was handed a large pair of scissors. 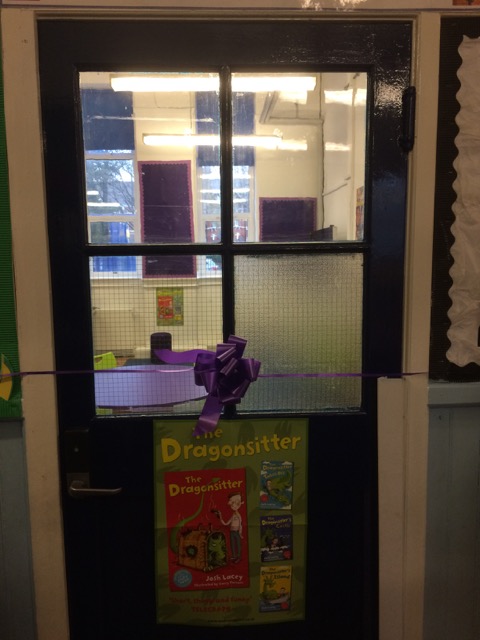 On the other side of the door was a freshly-painted, crisply-lit room stuffed with books. Cue cries of “oooh” and “look!” from the children who had been patiently waiting for me to snip the ribbon. They rushed around the library, eagerly hunting through the shelves, showing off their discoveries to one another, then pestering the teachers with questions, demanding to know when and how they could take books out of the library. Watching them, I thought about how much libraries like this foster a love of books and reading, and wished every school had a library as welcoming and well-stocked as this one. 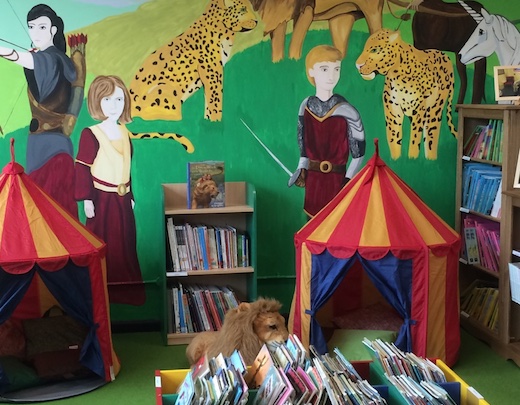 This week I was asked to open the new school library at Danetree Junior School in Surrey.

In these gloomy times, when the news is usually of libraries closing, and bookshops too, and children choosing to stare at screens rather than read books, and adults too, it was wonderful to see the passion and enthusiasm and hard work that had gone into this new school library.

When I was there, I unveiled a little plaque which will hang on the wall, and I heard about this library’s transformation and renaissance. The parents and teachers of Danetree have taken a dreary white room and turned it into a magical space, filled not only with books, but cushions and chairs, toadstools and fur coats, a lion and a faun, and a magnificent mural crammed with characters and scenes from the Narnia books.

Among all these delights, my particular favourite was the door.

I wish every school could have a library as loved as this. 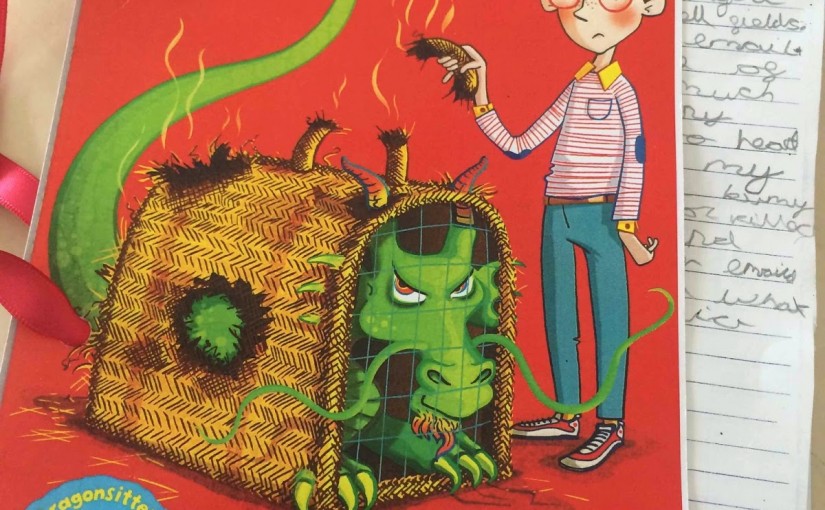 Thank you, Otter Class at Stanwell Fields Primary School, which I visited a couple of weeks ago. I did an assembly for the whole school in the morning, then taught some creative writing sessions for the rest of the day; as I was packing up to go home, one of the teachers presented me with this lovely little booklet that her class had made: 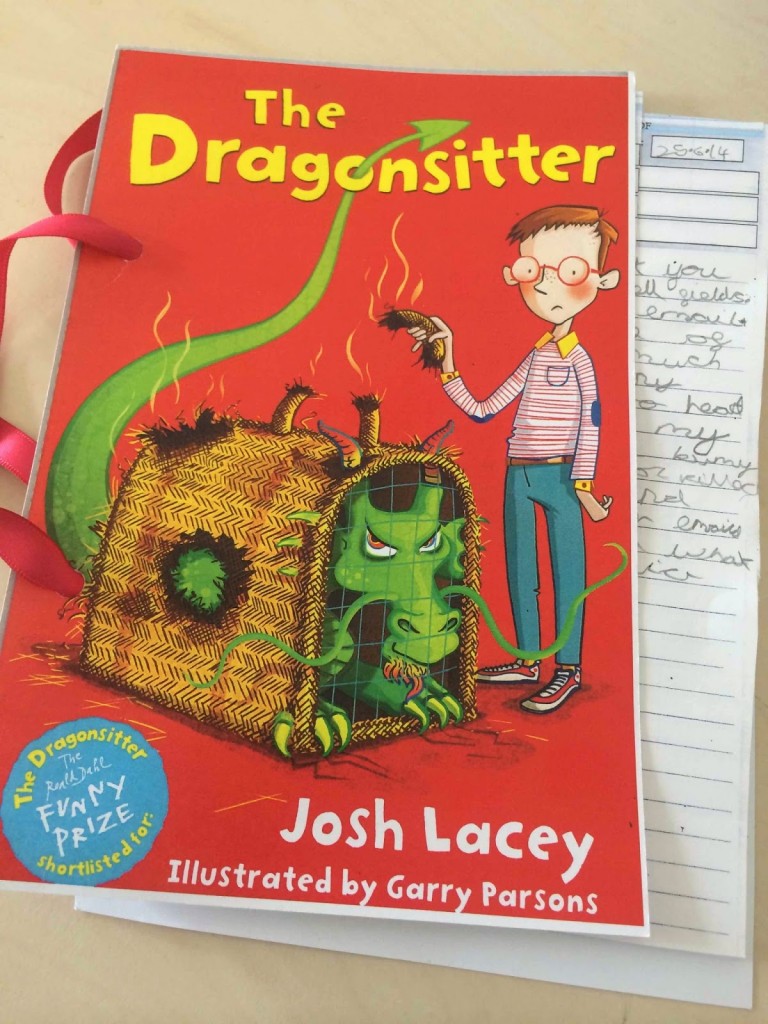 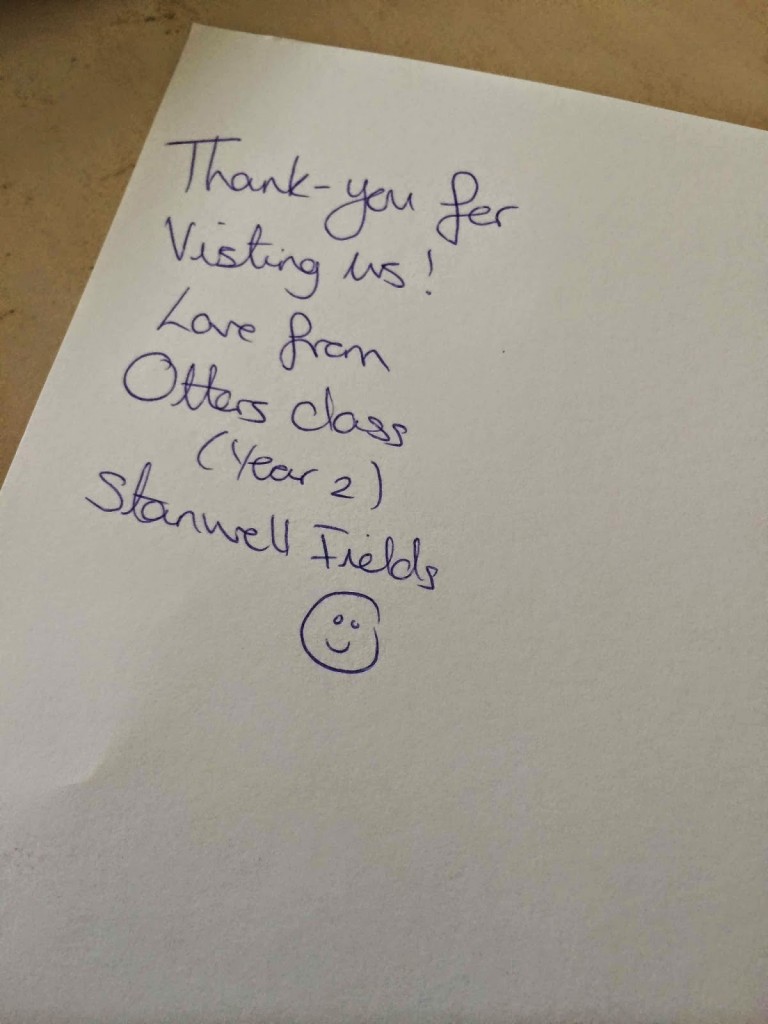 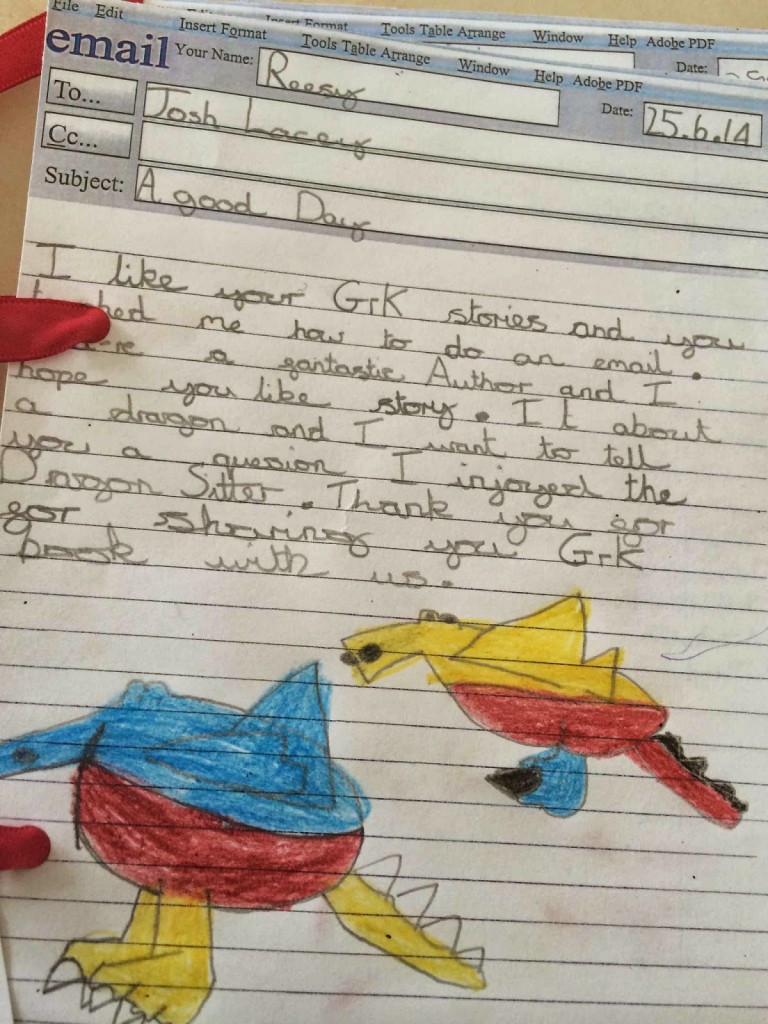 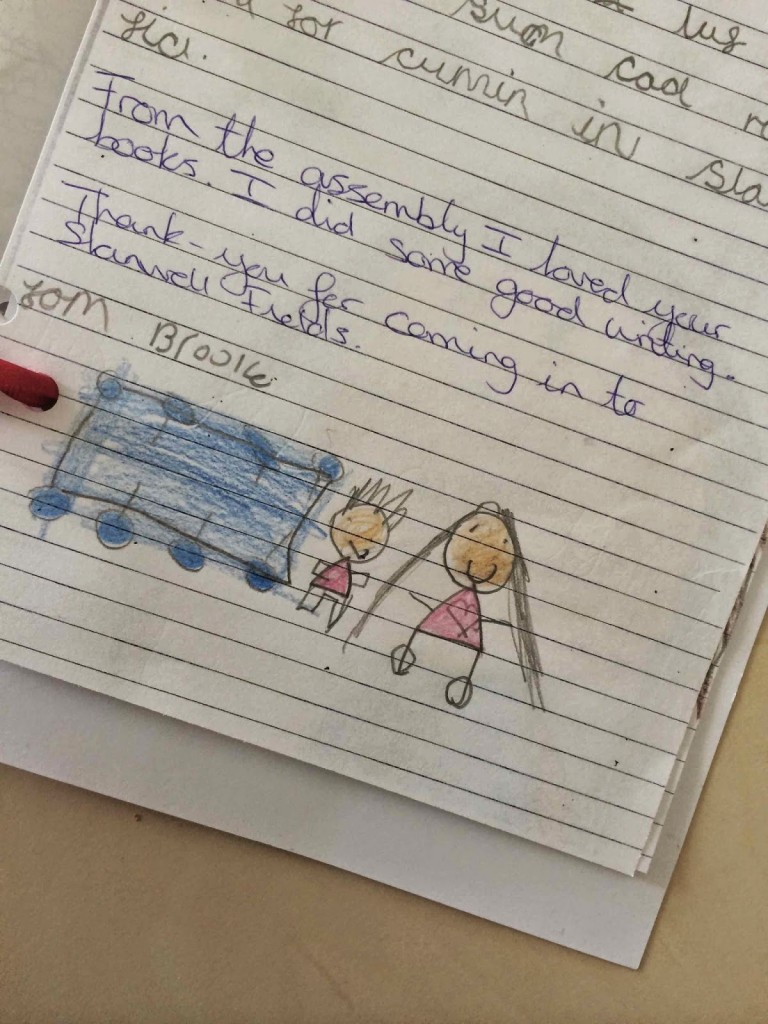